Muslims to protect Christians as they hold Mass in Cairo 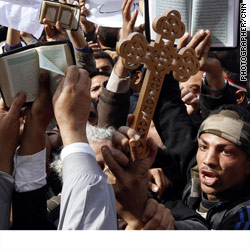 Christians plan a Mass in Cairo’s Tahrir Square today, and Muslim protesters said they would form a ring to protect them during the service. The Mass planned for 2 p.m. (7 a.m. ET) will pay tribute to those killed during clashes. Meanwhile, the Muslim Brotherhood said it will meet with Egypt’s vice president Omar Suleiman on Sunday. Days earlier, the group had said it would not negotiate until President Hosni Mubarak leaves office.