Posted by my52wow ⋅ April 10, 2011 ⋅ Leave a comment
The issue of religious freedom vs. separation of church and state is always dicey and sports is not immune. 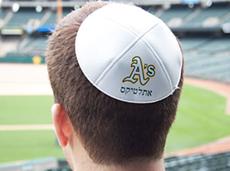 The Oakland A’s will hold their inaugural Jewish Heritage Night on May 17, 2001
CAPTION
By Travis LoDolce, Oakland A’s

But a national Muslim advocacy group doesn’t think it’s appropriate for teams to mix religion and sports. If sports teams are going do it, then the Council on American-Islamic Relations (CAIR) wants equal time for other religions.

“The ultimate test of this kind of policy would be to have a Muslim Family Day — and gauge the public reaction to it,” says CAIR spokesman Ibrahim Hooper. “Given the heightened state of anti-Muslim sentiment in our society, I have a feeling there would be some objections to that.”

The Oakland A’s, for example, will hold their first Jewish Heritage Night against the Los Angels May 17. Attendees get an A’s yarmulke and a seat in the plaza infield section for $26.

Steve Fanelli of the A’s says pro sports teams are offering religious-themed nights to move group ticket sales and because religious groups in their community approach them.

“Beyond religion it’s the same philosophy for any theme day: give fans a chance to enjoy baseball with their group and get together in an environment they may not otherwise choose to,” Fanelli says.