#47 of The 52 Things I Learned During (the First) 52 Weeks of Worship said, “There is a Catholic mass starting or ending all the time, somewhere, nearby.”

As I noted in the book, “As my (first) 52-week journey continued, I found myself, more than once, in bed on a Sunday morning trying to motivate to go to a service, and fighting the urge to say, “Well, I can always go to Mass this evening.” Often, I had to remind myself not to make this journey “52 Weeks of Catholic Masses.”

The “BK-edition” of M52WOW has been no different. Life is busy. Believe it or not, my life is busier than the first time I undertook this journey. That was a grief journey. I gave myself time to figure it all out.  I was still self-employed; my time was more my own. I was living in Chicago, which just has a different pace than New York City. This 52 weeks is different. New York is non-stop. Chicago, I miss. It had times when I was going hard, and times when I could just relax. New York demands all your energy, all the time. And then asks for more. Participate, it says. Grow. Give me all you got. It is wonderful and frustrating, and amazing and exhausting.

On this particular day, I was emerging from a very busy week, and about to embark on an international trip for work. I am not immune to wanting, needing time to just do nothing. Watch mindless tv. Daydream. Hang out. Whatever. And as we all know – it is often during that “want to do nothing time” that worship is supposed to happen. Early mornings. Weekends. After work. Time when it would be nice to just…rest.

But this My52WOW-BK edition is a promise I made to myself. I had scheduled my travel so I had a chance of attending a service somewhere in Brooklyn. In The First 52 Weeks this would not have been an issue – I went to service wherever I was – anywhere from the South Side of Chicago to South Africa. But this time around, my commitment was to doing this in Brooklyn. A bit more challenging, I have found.

First I thought I would try to go to a Friday night Shabbat service at a new synagogue, or visit the Moorish Science Temple in Brooklyn (which I will definitely try to visit later – it looks fascinating.) But I ended up working late enough that the Shabbat service was not an option, and the Moorish Science Temple service appeared to be a long one. For a three hour service, I need to be refreshed and ready. I was neither.

I also considered visiting a Seventh Day Adventist church on Saturday morning, but when I calculated my time – and all the tasks I needed and wanted to do before flying out, I decided Week 10 would be a mass day. It was only the second mass in 10 weeks. Not so bad. In the First 52 Weeks, I visited 61 places of worship, and 9 were Catholic. So, I am doing a bit better so far, I think.

Anyway…I slept in on Saturday, watched my shows, started to clean and pack, went to get my hair and nails done…and then I went to mass at The Parish of Saint Paul and Saint Agnes. Lest anyone think I am a paragon of spiritual goodness, I should let you know that I was continually googling to figure out what mass started late enough that I could get all my pampering done, but early enough that I would not be too tired to get home after mass, pack, watch one of my favorite shows and make my 8AM flight. I literally hopped in an Uber with my manicure not yet dry so I could make it to the 5:30 mass. I know. Ridiculous.

So, yeah, this is not all about spiritual transcendence. Often it is me trying to shoehorn worship into my life just like everyone else. And trying to keep a promise to myself. And trying to remember that it makes sense to make time.

My Uber arrived, I checked the estimated time of arrival, which would put me in a pew by 5:30, and then made my way to The Parish of St. Paul and Saint Agnes, or so I thought. 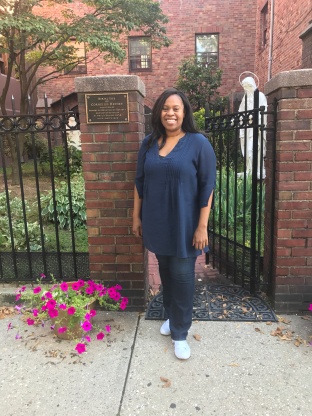 I first found a small temple, and a garden. Both were lovely. I took my customary photo in front of what I thought the location of the service would be. A man and his friend were watching me. “Do you want me to take a picture of you?” said one of them.

“You are not afraid that I will run off with your phone?” the photographer-to-be said, laughing.

We all laughed together, he took the picture and returned my iPhone to me. (Thankfully. Nobody wanted that kind of drama outside the Lord’s house!)

I walked into the temple, saw people praying, walked through to the garden and saw people enjoying the lovely surroundings.

But I was not at all sure that I was in the right place.

It turns out that the tagline for The Parish of Saint Paul and Saint Agnes is “One Parish, Two Churches” – they exist on the same city block, and after asking a kind stranger in the first location where I found myself, she let me know that the 5:30pm mass was taking place around the corner, in the big church, which I believe was St. Paul. The original location, I believe was St. Agnes.

I walked around the corner, and saw the main entrance. My first thought was – this is simply breathtaking. My second thought was – “I am so glad I came here, on this day.” I took my pictures, sent them to my family chat so my mom and my sisters could participate in the goodness, then walked up the stairs of the church into the amazing sanctuary.

All the back and forth that I had with myself, a few friends who I shared my dilemma with, the googling, the summoning of Ubers and juggling of my day all led me to this beautiful church where I would spend an hour sitting in the presence of The Divine, taking in the wonder of the service, and basking in the joy that this project brings me from week to week.

And this week, that joy was much-needed.

You see, the day before I had spend some time talking to a friend who had had a similarly stressful week. This really affected me – as I tend to feel everything deeply. I came away from that conversation likely not helping my friend at all, and feeling a little sad myself– my friend was asking the questions we all ask ourselves – questions that I don’t really have brilliant answers to:

What is my life?

How did I get here?

What can I do to make it through the tough times?

How can I figure out how to be the person that I would like to be? Is it still possible to be that person? To live the life I dream about?

And I realized, as I knelt down at the back of the church before making my way to the pew – right now, this is my only answer: taking the time every once in a while, however much time I can, to sit in the presence of The Divine, give thanks for what I have, and draw strength for the journey to come. To soak in the kindess of strangers – those who don’t know what I do or who I am – just that I am one soul coming to a house of worship to figure out how to make it through the challenges of this life, one day at a time, and sometimes one breath at a time.

The First 52 Weeks of this journey were a grief journey. There were times when I didn’t know how the heck I would make it through the loss of my father, my grandmother, and the end to a relationship that seemed at the time to be extremely important. As I shared in Week 18 of the book:

“In getting through… my healing year, I’d made a decision to do two things:

1) Breathe in and out every minute, every hour, until 24 hours passed and another day hopefully brought me closer to feeling better, and

My life now is different in many ways, but on some days, those two things get me through. Just breathe. And help people. And hang on. And see how this all turns out.

As I sat in that pew at The Parish of Saint Paul and Saint Agnes, I rested in the familiarity of the cadence of the Catholic service. The standing, the sitting, the songs. The “peace be with you,” and the “and with your spirit” call and response. The homily that shared some relevant nuggets of wisdom. And within that short hour of service, I exhaled.

I started out the day thinking I was taking the easy way out by attending a Catholic mass instead of one of my other options. And yes, I could have prioritized visiting a different place of worship over getting my hair done, or catching up on the latest episodes of my favorite shows. But the point is, I got there, and it was worth it. It was just where I needed to be.

After the mass was over and I read through the bulletin in detail, I had the same feeling that I had after mass at St. Mary of the Angels during Week 45 of The First 52 Weeks. I am not Catholic. There are things that Catholics believe that I don’t believe. But that is okay. I was still blessed by the service.

On this Saturday evening, as I walked through the Cobble Hill section of Brooklyn to try a new restaurant after service (Wilma Jean, a new pick! Delicious!), I thought – Week 10. This is good. Mass was good. All is well.