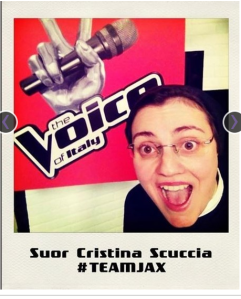 I just love Sister Cristina. She made me smile the first time I saw her perform on the Voice. She rocks, and her friends, the dancing team of support nuns do too!

“Sister Cristina, 25, lives in a convent in Milan. Singing was always her passion. Now she’s a television star — with the New York Times reporting that her April appearance on a sing-off battle (she and another singer took on Cyndi Lauper’s “Girls Just Wanna Have Fun” duet) “roughly quadrupled the ratings the show had registered before she joined it in March.” That video, posted April 16, has 5.5 million views.”

Here is another wonderful article about her performing on Italy’s version of The Voice, including links to her performances!

« The Power of Forgiveness: Archbishop Desmond Tutu and Reverend Mpho Tutu
Some Wisdom from The Earth Center – Life is not a combat… »